Family-Owned and Operated Since 2002

For over 20 years, Cool Touch has operated on the principle of providing customers in the Prescott Valley and Phoenix Metropolitan Areas with the finest customer service and the best HVAC, plumbing and indoor air quality products and installations. We place a high value on providing honest options and customized solutions for comfort and indoor air quality needs.

As a family-owned and operated business, we believe in our workmanship enough to back it up with a 100% satisfaction guarantee—so when you call on us, you can feel certain our team will get the job done right the first time. That’s why our motto is “Kick back and relax. We’ll keep you cool.”  Whether you need a new HVAC system replaced or repaired, an indoor air quality solution installed, or help repairing a leaky pipe, we are the team you can trust to keep you comfortable.

The Best Team to Care for Your Comfort

It has always been our philosophy to hire good people, and we’ve discovered that it’s easier to teach a good person how to be an air conditioning technician than it is to teach an air conditioning technician to be a good person. Owners Chris and Charmaine know that challenging circumstances will show what a company is truly like, and at Cool Touch, we take pride in our skill at troubleshooting, always being transparent with our customers, and always aiming to make things right. We have more than 35 employees who believe the same! 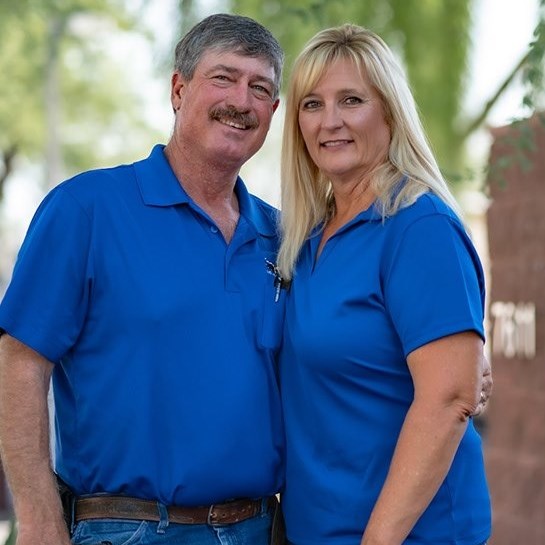 Chris Funk, our founder, started his career in 1987, working for one of the largest air conditioning companies in the Phoenix Metro Area. Through dedicated work, he rose his way up to senior technician. In 2002, Chris founded his own company, Cool Touch Air Conditioning and Heating, because he saw a need for an HVAC contractor that emphasized honesty and reliability—a contractor all customers could trust. Chris believed that he could make his company thrive by following two core values: put the customer first, and always fulfil commitments.

Chris’s devotion to these ideals paid off: after almost twenty years, we’re proud to say we have an A+ rating with the BBB and have never received a complaint with the ROC. Our family of satisfied customers continues to grow by the month.

Chris married Charmaine in 2004, and she joined the Cool Touch family as the General Manager—overseeing anything that doesn’t have Freon in it. (It’s a running joke around the company that if it has antlers or Freon, you talk to Chris. Anything else, talk to Charmaine.) Their son Brannen also joined the company to run the Commercial division.

Chris and Charmaine have another passion outside of air conditioning, which is cattle ranching. In 2018, they achieved their dream of purchasing a cattle ranch just outside of Prescott, AZ. When they aren’t working hard at Cool Touch, they’re out riding horseback and tending to their cows in the cool air of Dewey, AZ.

Fill out the form below and we'll reach out to schedule your service appointment.